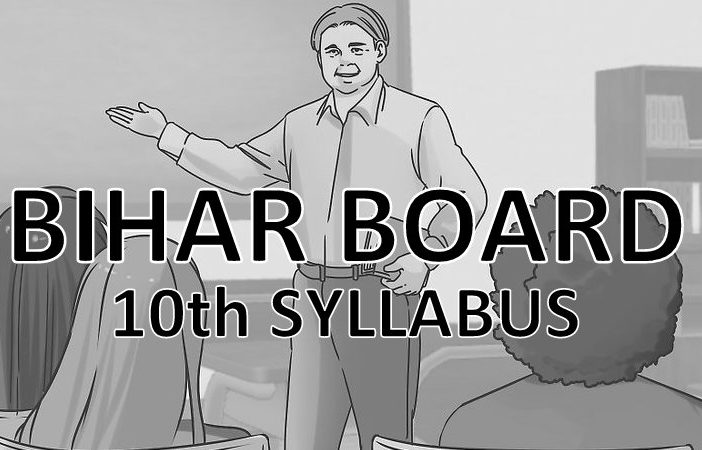 Bihar Board Matric Maths Syllabus for Class 10 PDF:  Here we have updated the Bihar board 10th syllabus to help the students who have been studying 10th Class. By using this Syllabus the Candidates can prepare more effectively for the exams. The Latest updated Bihar board syllabus 2021 class 10 Mathematics is provided on this page. Students can refer to the Bihar Board 1oth Maths Syllabus to plan their studies and exam preparations well. Here on this page, we have updated the BSEB Mathematics Syllabus for the Sake of the Candiadtes in PDF Format, which helps the students to prepare more effectively for the Examinations.

Euclid’s division lemma, Fundamental Theorem of Arithmetic – statements after reviewing work done earlier and after illustrating and motivating through examples. Proofs of results – irrationality of  2 , 3, 5 , decimal expansions of rational numbers in terms of terminating/non-terminating recurring decimals.

Algebraic conditions for a number of solutions. Solution of pair of linear equations in

two variables algebraically – by substitution, by elimination, and by cross multiplication. Simple situational problems must be included. Simple problems on equations reducible to linear equations may be included.

Standard form of a quadratic equation ax2 + bx + c = 0, (a  0). Solution of quadratic equations (only real roots) by factorization and by completing the square, i.e., by using the quadratic formula. Relationship between discriminant and nature of roots.

Problems related to day-to-day activities to be incorporated.

Trigonometric Identities: Proof and applications of the identity sin2 A + cos2 A = 1. Only simple identities to be given. Trigonometric ratios of complementary angles.

Simple and believable problems on heights and distances. Problems should not involve more than two right triangles. Angles of elevation/depression should be only 300, 45 0, 600.

Review the concepts of coordinate geometry done earlier including graphs of linear equations. Awareness of geometrical representation of quadratic polynomials. Distance between two points and section formula (internal). Area of a triang le.

Tangents to a circle motivated by chords drawn from points coming closer and closer to the point.

Motivate the area of a circle; area of sectors and segments of a circle. Problems based on areas and perimeter/circumference of the above said plane figures.

(In calculating area of segment of a circle, problems should be restricted to central

angle of 60°, 90° and 120° only. Plane figures involving triangles, simple quadrilaterals and circle should be taken.)

Classical definition of probability. Connection with probability as given in Class IX. Simple problems on single events, not using set notation.

Further discussion on concept of ‘statement’, ‘proof ’ and ‘argument’. Further illustrations of deductive proof with complete arguments using simple results from arithmetic, algebra and geometry. Simple theorems of the “Given ……… and assuming… prove……. ”.

conclusion. Explanation of ‘converse’, ‘negation’, constructing converses and negations of given results/statements.

Reinforcing the concept of mathematical modeling, using simple examples of models where some constraints are ignored. Estimating the probability of occurrence of certain events and estimating averages may be considered. Modeling fair installments payments, using only simple interest and future value (use of AP).